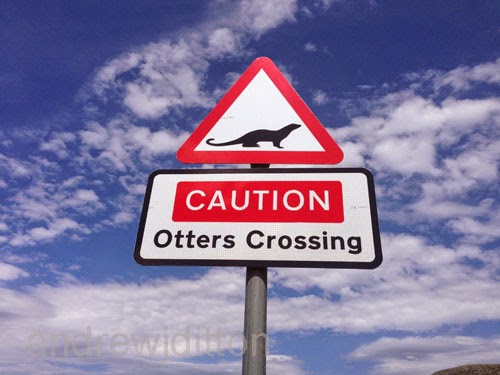 Here we go... event of the year, my trip to paradise and the islands I find so totally and utterly irresistable. Since discovering the Outer Hebrides in 2009, I've completely lost the desire to go anywhere else. When I do go other places, my reaction is normally: 'Well, it's nice, but it's not the Outer Hebrides...' 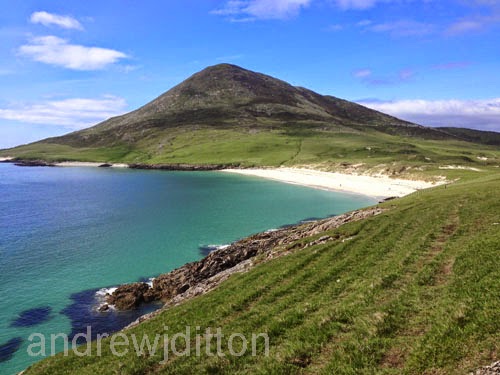 I'd not been to Ullapool since that first trip five years ago. It's a gorgeous little town that warrants a longer stay yet, just like the North End of Skye, I never hang around because I know what riches lie just across The Minch (the sea between the mainland and the islands).

I thought I'd be smart and fill up with diesel in Ullapool HOW MUCH???!!!! 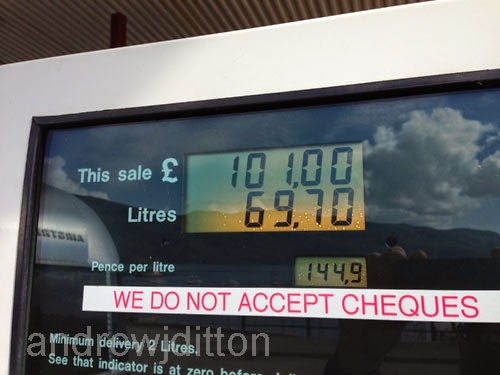 I later found out that fuel is much cheaper in Stornoway. Nothing to do with cost of the raw material or transportation then, all to do with local competition. In other words, you get ripped off in places where there is little competition. Like Ullapool.

The last time I travelled on Caledonian MacBrayne's ferry 'Isle of Lewis', it was still a couple of years BC (Before Canine). I LOVE Caledonian MacBrayne for many reasons, one of which is that you don't need to leave your dog in the car or in a kennel, you can take it upstairs with you where there is special pet lounge. 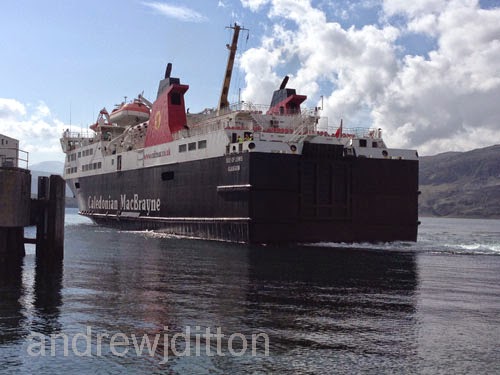 I have to say, the Pet Lounge on the mv Isle of Lewis is my least favourite so far, as there are no windows. Let's hope the new ferry that takes up the route in 2015, mv Loch Seaforth, will be nicer. I'll certainly be giving that a go. The mv Hebrides (from Uig in Skye) and the mv Clansman and the mv Lord of the Isles (from Oban) have much nice dog lounges. The mv Finlaggan is OK (to Islay) but on there you can't escape annoying televisions blaring out.

Arrival in Stornoway, Isle of Lewis, was at a temporary berth while the main pier was being altered for the arrival of the mv Loch Seaforth on the run. As such, there was a mighty angle in the loading ramp, but the deck crew were outstanding. I was told to take my time and had 'deckies' checking from four angles as I inched the Airstream off the ramp and onto the pier. Chocks were put into place where necessary, and we were off without grounding or any problems whatsoever.  Have I mentioned I love Caledonian MacBrayne?

Our destination was 90 minutes away towards the South of the Isle of Harris, but all the main services are here in Stornoway. Dougal had been limping off and on since hurting his paw in Brora so our first call was to the vet. Luckily I remembered that there is a large car park near the vet by the BBC Alba studios so I could park the entire rig for an hour without anybody minding. Otherwise, if you need to leave your rig for the day in Stornoway, there is paid Large Vehicle Parking Area behind Engebret's Garage. Everyone knows Engebret's and it's easy to find online.

With no fault found to Dougal's paw (probably a sympathy ploy to get more treats, that dog isn't daft) we headed South to Harris. To keep this entry short enough to be readable, I'll describe the camping on the island in a later blog entry. 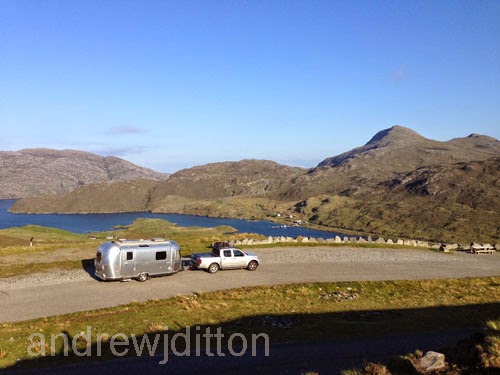 My friends G&C joined me in Harris with their Vanmaster Caravan. We had a fantastic week. Plenty of walking, eating, drinking, and photo opportunities. 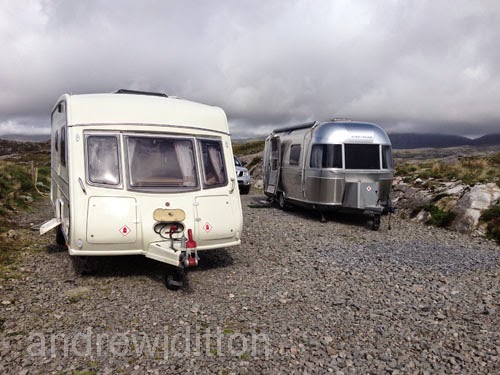 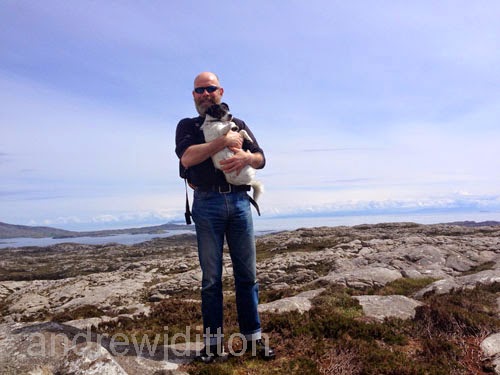 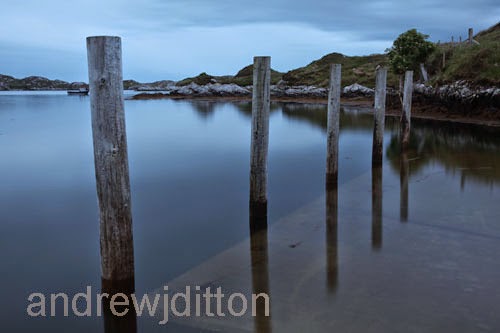 C *loves* cooking and I happen to love eating, so for an entire week I was spared making my own dinner. He was amazed that the local Co-Op in Leverburgh in the South of Harris had almost everything he needed, no matter how exotic the dish. Like any responsible caravanner, his aim was to buy all his food locally to ease loading the caravan and support the local economy. 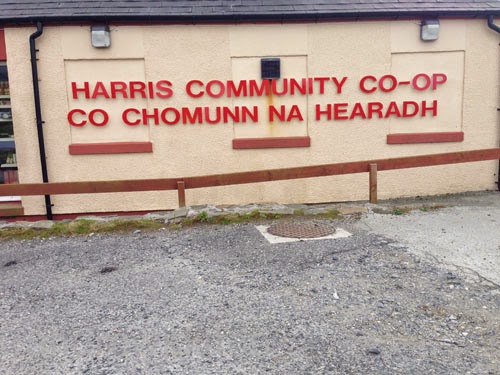 When eating out, we alternated between my two favourite cafes in the whole world, EVER. They are:

These two establishments are instrumental in my choice to stay on Harris instead of another island. 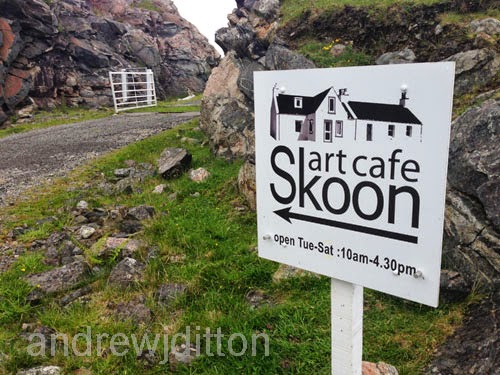 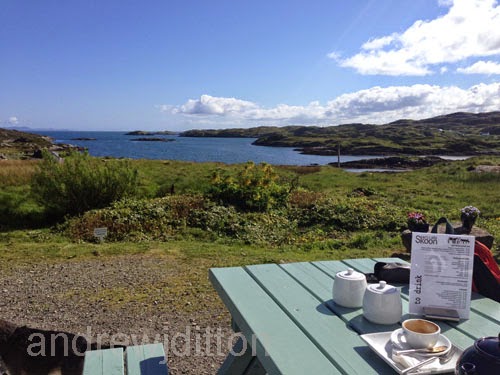 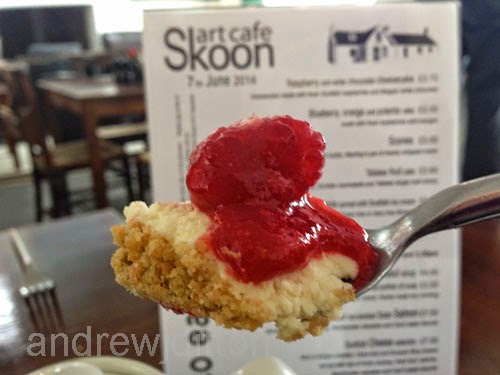 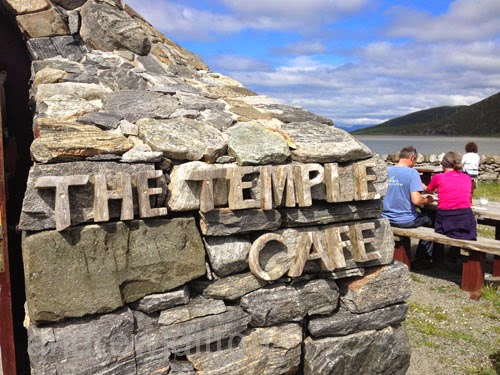 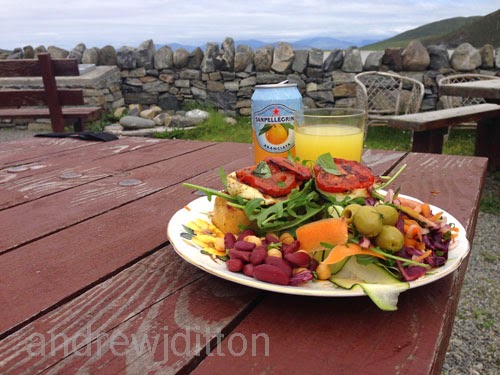 It was incredibly sad to see G&C leave on the Friday after one week. I decided to head South to the Uists on the Sunday. Meanwhile, it was that Saturday I sat outside Temple Cafe and witnessed the arrogant idiots that angered me so and inspired me to bash out the blog entry 'How Dare You'. I was fuming.

Come the next day I hitched up the Airstream and parked up at Northton to enjoy a crafty kitesurf. Little did I know that this would never happen again... you'll have to wait for the 'Hebrides Winter 2014' entry to find out why! 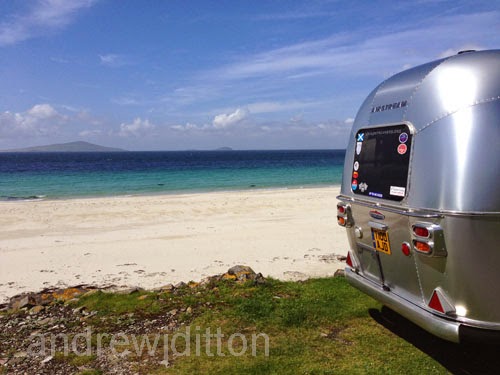 After yet another beautiful lunch at Temple Cafe (accompanied by farewells, hugs, and maybe a tear or two on my part) I boarded the ferry over to Berneray.


There are no camp sites on Berneray, so CalMac has provided a free service point for Caravans and Motor Caravans. Have I mentioned I love Caledonian MacBrayne? 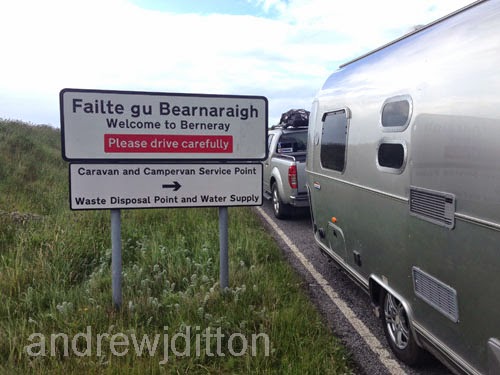 I snuck off down to the dunes to camp, and apart from doing my usual 'clean up' of the area (happily there was hardly any litter to clear this time) I really wished that there was an Honesty Box or something so that people who want to contribute back to the island in exchange for the free camping are able to do so. A brilliant scheme works in West Harris that allows this.


Next day, I went down to Moorcroft Campsite on North Uist for a couple of days. Moorcroft remains one of my favourite sites in the Outer Hebrides. I always get such a warm welcome from the owners Iain and Catriona, and they even indulge me and let me try out my pigeon Gàidhlig on them.

Once again I had a fantastic kitesurf in the shallow waters off the campsite: 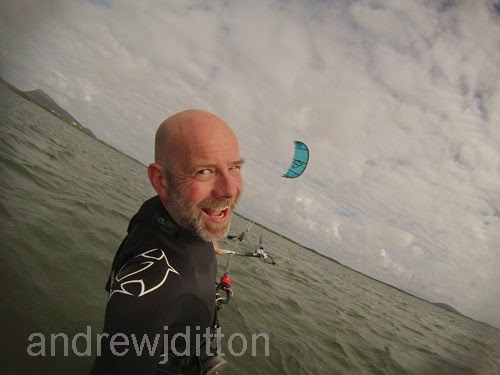 I had planned to stay a little longer in the Uists but I ended up charging down to the island of Barra as I wanted to catch an old acquaintance, Christine, before she left the island. I met Christine on that first trip five years ago, and she spends every summer on Barra in her Coachman Caravan. She's been doing that for more years than she cares to remember, and is a font of all local knowledge.

A funny thing happened on my way to Barra. First of all, let's just say that quite a few folks in the islands, both resident and visitors, know of 'The Man with the Silver Caravan'. Second, people in the islands are lovely anyway, and many will wave when you're passing even if you've never met before.

As ever, I took my time when the road was single track, and if I ever saw anyone coming the other way or behind me, I'd be the first to pull over. After all, I'm obviously on holiday with an Airstream on the back. That other person is likely to be a resident who simply wants to get from A to B.

Today, though, it seemed that the waves from the drivers (and passengers) were more enthusiastic than ever. I was a little puzzled. Had I met some of these people? Then, as I allowed a car coming the other way to pass, the occupants stopped alongside and wound down their window:

'Great blog Andrew!' the driver shouted. I felt humbled. It appears that not only do folks actually read this, but it also looks like the entry I wrote with steam coming out my ears ('How Dare You') struck a chord with a LOT of other people too. Aw shucks.


I'd not returned to Barra (other than a day trip) since 2010. In 2010 wild camping was stopped on the island, yet the campsites were not really ready to accept caravans and motor caravans. It was a bit of a bumpy transition period, but now the transistion is complete and it's probably one of the best islands for caravans and motorhomes.

I intended to spend just a couple of days at Scurrival (Scuribhal) Campsite at Eoligarry in the North of the island, then tour around and try the other sites in order to report back. However, laziness and a contented sense of being settled kicked in, and ended up spending the entire week at Scurrival. 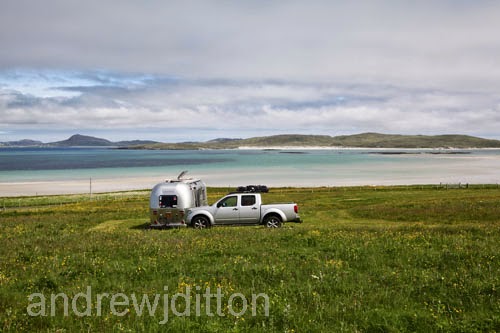 Now here's the thing that I'll be going into when I write about camping in the Outer Hebrides again: ONE WEEK at Scurrival cost me the same as ONE NIGHT on one of the campsites in Harris. Therefore the 'Airport Cafe' down the road got my business every day. Not only was the food good, there was free wifi and, of course, the daily theatre of being the only airport in the world where scheduled flights land on the beach. 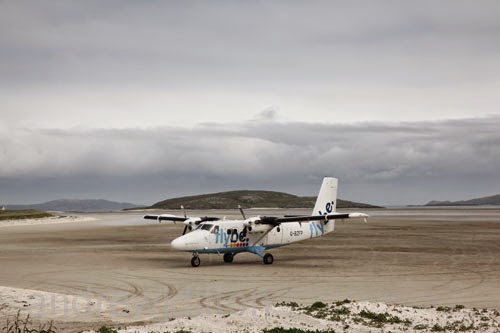 After a fantastic week re-acquainting myself with the island of Barra, it was with heavy heart that I headed to Castlebay one last time to board the mv Clansman. Stupid, soppy, sentimental fool that I am, I spent most of the trip outside at the aft end, watching my beautiful, gorgeous islands slip slowly out of site with tears in my eyes. Mar sin leibh Na h-Innse Gall mo ghràibh. Tillidh mi air ais. 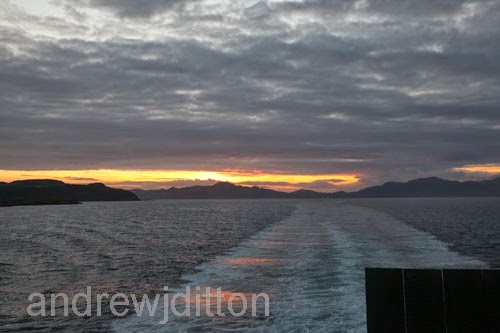