We interrupt this blog....

OK folks, I know that I am still dreadfully behind with my blog. Four months to be precise. This is what happens when work gets in the way.

There are some magical experiences to tell you about yet (yes, they of course involve the Outer Hebrides) but I interrupt the timeline to recount a distressing tale that happened to me yesterday.

In fact, what I will do is simply copy for you the letter that I emailed to Tesco this morning. I have wasted so much energy and lost so much productivity over this... but hopefully things will improve soon. Happy reading, and I'll leave it to you to decide where you are going to spend your grocery money after this:

I am writing to you having been humiliated and evicted from your Eastbourne Store.

Currently I am working on a commission to produce an inspirational feature about Brighton, which involves me staying at nearby places in order to competently review the campsite options for readers.

On Tuesday 17th July, my route took me through Eastbourne. I decided to pay a visit to your store en route in order to stock up on many items. As I had my Airstream travel trailer in tow, I naturally took the quietest, most remote area of the car park in order not to inconvenience anybody. I also chose my time wisely – it was midday on a Tuesday, not a busy period.

In addition to not wishing to waste any productive time, I was also making haste as road closures in Eastbourne were imminent for the Olympic Torch, and I wanted to be sure of being away from the town before these took effect.

As I was paying for my £70 worth of groceries at 12.55pm, a call was put out over the store’s PA system paging me as the owner of my vehicle.

After wasting a few minutes queuing at Customer Services, the lady behind the desk said that she knew not why I had been called, and I should go and see the gentleman at the security podium.

I approached the gentleman with my trolley full of paid-for shopping in its bags, and asked if he had called me. His reply, in a most abrupt manner, was:

‘Yes. I must ask you to leave. You are parked on private property.’

‘You are taking up too many parking spaces. And you are blocking the recycling area’ he replied in a most surly tone.

I pointed out that I was certainly not blocking the recycling area, and that I had deliberately chosen a quiet area in the car park so as to not inconvenience other customers.

Rather incredulously, the security guard then asked why I was parked there.

I gesticulated at the trolley full of purchases and said, trying desperately not to sound ironic, that I was visiting Tesco to do my shopping.

‘Well, we’ve had problems with caravans before. They say that they are here to do their shopping but they just stay all day causing us problems.’

By now I realised that I was getting nowhere in this ridiculous conversation and asked to see the store manager. The security guard wandered off, and came back about a minute later to tell me that the store manager was on a conference call for the next 30 minutes, and I would have to wait if I wished to see him. There was no offer of seeing any deputy or supervisor.  I was not prepared to waste a further thirty minutes of my time waiting to see the store manager who was obviously too busy running his store to speak with the customers for whom it actually operates. I also needed to be away before the road closures mentioned previously came into place.

As you may well imagine, by now I was absolutely seething with anger and frustration. I informed the security guard that I am a journalist who is (in the main) highly thought of by the majority of the UK’s one million plus caravanners, and that I would be taking this matter further.

‘Yeah, do that,’ he taunted in a mocking tone as I left the store. Throughout the exchange, a silent colleague of his stood looking on, smirking with his arms folded.

I completely understand that a modern supermarket needs to ensure that parking rules are respected in order to make spaces available for its customers. This is why I chose a quiet time to visit. I did not want to make a 25 mile round trip to do my shopping after having sited the Airstream when plenty of parking space was available.

I also understand that itinerant travellers (as opposed to the millions of leisure caravanners) may have caused problems in the past and as such you would like to be sure that any visitors are there for genuine reasons. If your staff did have cause for concern, then surely the fact that I had a trolley full of purchases a mere 55 minutes after arriving should have been reassuring enough. I don’t have a problem with being called in order to allay any concerns of the staff. Were I dealt with in a friendly and respectful manner, I would have very quickly assured your staff that I understood their concerns, I was indeed a genuine customer, and I would be away within the following ten minutes.

As for ‘Having had trouble with caravans’ in the past, the security guard was referring to overstaying the permitted time. As I have already mentioned, I had only been there for 55 minutes. Yet I was treated with contempt as if I had already committed some kind of breach of regulations or decency.

This incident has left me incensed. In order to write and therefore make a living, I need a clear and creative mind. So far I have lost over a day’s productivity at a personal cost of £250 as I am so upset and angry about what has happened, not to mention the utter humiliation at the way I was treated. Now I am spending my time writing you this missive while I should be writing revenue-earning copy.

Naturally, I will no longer patronise your stores of any brand. I have deleted the Clubcard and Tesco Finder apps from my iPhone and I am making steps to change network provider away from Tesco Mobile.

What disappoints me even more is that I have on more than one occasion in touring media extolled the virtues of stopping off at supermarkets during quiet periods as an alternative to overpriced service areas, in order to take advantage of the café and fuel stations offered.

If Tesco does not want the business of the UK’s caravanners and motor caravanners, do please let me know. I will then communicate this to the one million members of the Caravan Club for whom I write and blog so that they may direct their portion of the £6bn per year that caravanners contribute to the UK economy accordingly.

Here is an image of the ‘offending’ rig in the car park. I am sure that your own CCTV footage will satisfy you that the rig has not been moved for the photograph, and that this image has not been manipulated in any way. 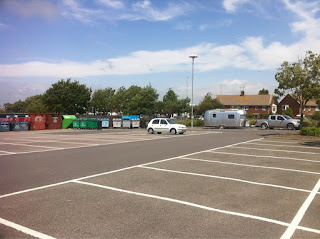