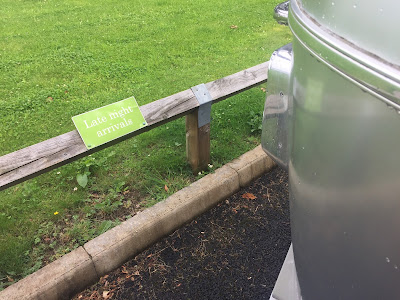 Many of us live somewhere not too distant from a huge conurbation like London, Birmingham, or Glasgow. As such, if your journey takes you around or through said conurbation, you have to consider planning your journey to avoid getting stuck in traffic at busy times. Here in the South East of England, that means avoiding the M25 between 6.30am and 10am, and again between 4pm and 7pm.

When faced with a long journey, like my recent trip up to Scotland, I normally aim to travel in the evening when the traffic is, generally, free-flowing. I would break my journey when tired at 'Late Night Arrival Areas' on Caravan Club Sites, but I have now come to the conclusion that that is less than ideal.


On my recent trip, I was aiming to be leaving 'Base Camp' in Kent at 2pm. However, this was the state of play one hour later at 3pm: 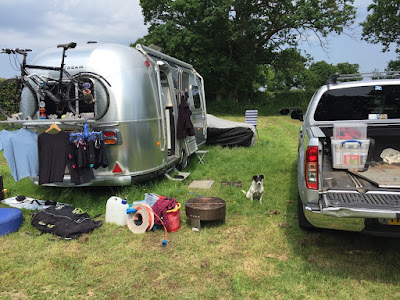 Oops. Laundry to dry, still the bike to load, still the kitesurfing kit to tie down on the roof, and one very impatient and frustrated little puppy. So I decided to take it easy and leave after the evening rush, at about 8pm. At least it meant I had time to attend to those REALLY IMPORTANT jobs, like polishing the exhaust pipe on the bike to make sure it looked good when people were overtaking us on the motorway: 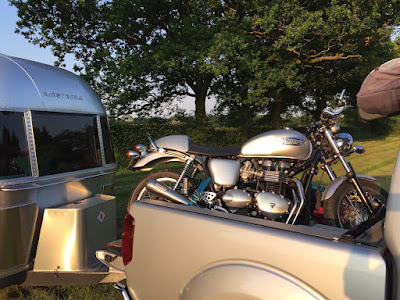 Off we sailed, cruising freely through the Dartford Tunnel and enjoying a relaxing tow around a free-flowing M25, and up the M11. As the clock approached 11pm, it was time to stop and rest for the night, so we headed for the Late Night Arrival Area at Ferry Meadows Caravan Club Site in Peterborough.

ARGH! Horror of Horrors! Upon arrival, the gates were locked, as they had been since 10.30pm. 'Murt mhòr!' I cried, my favourite Gaelic saying du moment. It means something like 'Oh heavens above!' I had no option but to overnight on the public road, fretting the night away about my unsecured kit on the car.

Six glorious weeks later, heading back from my hols, the ferry docked at Oban at 11pm and I wanted to get a few miles under my belt before facing the long day of driving South for work the next day, so I managed to keep going to Strathclyde Country Park near Glasgow where I slunk in at 2am, but thanks to the 'Driving Wobbles' I couldn't get to sleep till well after 3am. Which meant I didn't wake up till midday...

...which meant I didn't get to Cambridge until 10pm. So I slunk on to the Late Night Arrival Area, joined by a second caravan at 11pm.

Meanwhile, my antics had been causing consternation among wardens and the Caravan Club. I woke up in Cambridge to discover that this area was for people who had a booking. I didn't. Meanwhile, the people in the caravan next to me *did* have a booking, but as they were on a ferry from Holland until 9pm, they did not have the phone signal to ring ahead and warn the wardens. Which meant that their booking was cancelled and a 'Black Mark' applied to their name, which they then had to ring up and sort out with the Caravan Club and have removed, lest it annulled any future bookings. This, my friends, is the reason I don't normally book in advance. I just don't know how far I'm going to get. I still remember heading up to the Caravan Writers' Guild Event in North Lincolnshire with the kind of migraine that saw me stopping to throw up and lie in the Airstream face-down for an hour every 30 minutes. It took almost 8 hours to cover 120 miles of free-flowing motorway.

The late nights, local arrangements on sites, angst caused to myself and the hard-working and ever-patient Caravan Club wardens are, I have now decided, simply not worth it. In future I think it really is worth missing a day and keeping 'normal' hours. Yes, it will be a faff to unhitch the caravan every evening and hitch it back up again in the morning, but it will give me time to relax and unwind in the evening and a allow a decent night's sleep. There will always be the problem of having to make a booking in peak season then risking not making it if health or traffic conditions dictate, but that's something I'll have to deal with if it happens. But for now, I think setting off at 9.30am, taking a break between 4.30pm and 6.30pm, and aiming to arrive on site at 8pm (with a courtesy call to the wardens to let them know) is definitely the way forward.