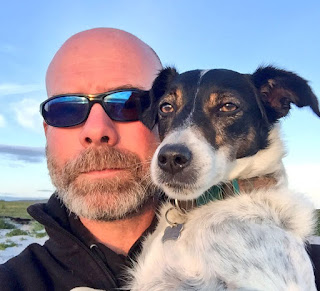 Hindsight is a wonderful thing. Sometimes, it is only after something has happened that you can look back and realise what it was that was happening. At the time, you are so involved in whatever it is, that you don't actually realise what 'it' is.

Last year in 2015, after a particularly stressful and lousy three-month trip to Scotland, I decided to take a break from writing (other than the occasional blog post) and stuff like that. The 'plan' was to catch up on everything and live a serene life filled with time a-plenty to do anything I wanted to do.

The reality was that while I *DID* manage to spend a good amount of quality time on my Gaelic studies, I wasn't acheiving the countless small, simple things I wanted to acheive. Still the pile of my 'stuff' in the corner of Mum's garage is there, awaiting the week I devote to sorting it out. Still I haven't managed to set up a the website that I've been in the process of trying to set up for three years. Still it took a whole year to edit the 40 or so videos outstanding from the Scotland trip.

'If you want something done, ask a busy person' goes the saying, and this is so true. While I had made plenty of time in my life, the inclination to do anything seemed to evaporate. I went to Glasgow for three months at the end of 2015, and while the first few weeks were fun, as soon as the clocks changed and I'd done the Gaelic radio interview for which I had been preparing for months, I slumped. With nothing to get up for, it was a struggle to get out of bed during the dark mornings. By the time I was up, showered, dog walked, beds away, and breakfasted, it was starting to get dark again. The friends I had hoped to make didn't seem to materialise. That huge void of empty time I had created was not filled with serenity and creativity, it was a vacuum filled with negative and self-defeating behaviour that just seemed to get worse. This was not what I had envisaged.

As winter melted into spring, I had a college assignment to do, and I decided that I was going to 'do it properly' and take the Airstream up to the Outer Hebrides after a short stint at college on the Isle of Skye. Rather than give myself three weeks, I gave myself half that - 10 days. I also called up the Caravan Club to see if they'd be interested in an article about it. After all, it would be a nice way to try and convey how caravanning can not only be a way of taking a relaxing holiday, it can also make for an enlightening, richly cultural and educational break too.

Everything 'clicked' on this trip in April. Relationships were established, friendships cemented, roots planted, and the faster pace of the trip meant that there simply wasn't the time to get bored or stay in bed too long. There was way too much to do.

I really, really enjoyed it.

My plan obviously worked. Despite never having written any kind of academic paper in my life ever (I did all my research BEFORE I knew what Havard Referencing was, so I had to do it all again) I managed to get myself an A grade for the project.

Meanwhile, in June, I headed back up to the Hebrides, this time for six weeks. Despite the longer time frame, I had so much scheduled that the pace would, once again, be quite fast.

A funny thing happened on my way to the Hebrides. I had just downloaded a new album by a group from the Isle of Skye called 'Niteworks'. Two tracks hit me between the eyes - a Gaelic language dance/club track called 'Taobh Abhainn' with vocals by the honey-voiced Alasdair Mac Ille Bhàin, and a haunting monologue 'Somhairle' which was a recitation of 'My Island' by the poet Sorley MacLean.

I knew I wanted to make videos to both of these tracks, although after seeing Treacherous Orchestra in Stornoway with my friend Cathy, I decided to use their music to one of the two films instead.

The recitation 'Somhairle' re-awakened a creativity that had, I realised with hindsight, been dead for about three years. That kind of coincides with when my Dad became ill for the last time before his passing. Everything started to make sense. While I thought I was over the loss of my Dad and functioning normally, obviously I hadn't really come to terms with it and hadn't quite 'got over it' as quickly as I'd thought. It had taken three years.

With that fire of creativity well and truly lit, I dashed through the Highlands to squeeze in an unscheduled 48-hour trip to the Isle of Raasay - the place where Sorley MacLean ('Somhairle') was from, and a place where I knew were derelict iron works that would be perfect for the video still in my head. I also wanted to go visit 'Hallaig' for the first time, a village that was abandoned during the Highland Clearances. It took a good hour's walk in the drizzle and midgies to get to Hallaig, and it was something I don't think I would have done during the previous three years.

The rest of the trip was truly wonderful. I really need to write a proper blog post about it to do it justice. However, there is a video to the trip which also tells the story; you can see that here:


Or there is a more concise, sub-4 minute version here:


And finally, the piece that re-ignited a dormant creativity, Somhairle:


I realised once I got back down South, that the less I had to do, the less I wanted to do. Yes, to do too much is no good either, and you need to strike a balance. And that's the word, 'balance'. I realised I had actually gone too far the other way.

As such, the 'Gaelic' piece for the Caravan Club Magazine won't be the last by any means. Right now I'm away in the Airstream researching a commissioned magazine touring article. Yup, we're back!