I'm using my time in the Outer Hebrides to slow down and catch up a bit. Before getting up to date, we need to go back a couple of months:


Back in June '13 it was time to take my wee dog Dougal abroad for the first time. For some inexplicable reason that no ferry company can explain, dogs have to be left in cars on 'short sea' international ferry routes. That would probably be fine if it wasn't for all the numpties who fail to isolate their car alarms that screech incessantly for the entire crossing, freaking out any animal on the car deck and no doubt also annoying any off-duty crew who are trying to sleep in downstairs cabins.

Caledonian MacBrayne and WightLink, on the other hand, have no problem providing a pet area on board their ferries. Pets can go upstairs and travel with their owners in a dedicated lounge with vinyl seats and flooring. They're not allowed into the bars or food areas. 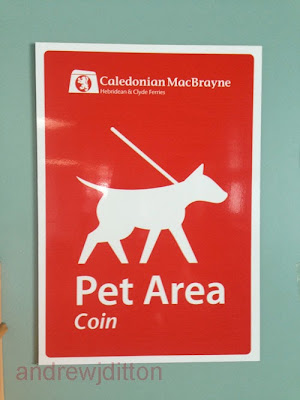 Not wishing to leave Dougal scared and alone on the car deck, we booked our passage to France with Eurotunnel. As ever, we booked through the Caravan Club who managed to do us a better deal than we would have managed even booking direct on the internet.

Very impressed with Eurotunnel I was too. Boarding was hassle-free, parking up a doddle, and for the 35 minute trip both myself and Dougal could travel together in the civilised comfort of our own Airstream. Meanwhile, 50 metres above us people were elbowing each other in queue for the cafeteria. Gas must be isolated in the Tunnel, so I had earlier prepared a flask of coffee to enjoy during the journey. Disembarkation was unbelievably quick. No getting wound up on crowded car decks while asphyxiated by lorry fumes… simply drive off, and within just two minutes you're on the motorway. It was all just so quick, easy, civilised, and dog-friendly. 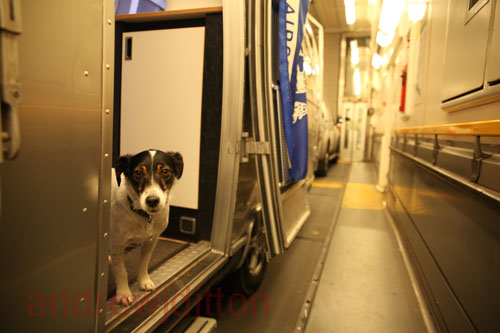 For a few days we camped in the gorgeous yet little known German town of Oldenburg, which is in the North of the country between Hamburg and the border with the Netherlands. A very dear friend of mine lives in Oldenburg and I spent an enjoyable time being spoiled by his lavish hospitality and taking our dogs on longs walks in the lush green landscape of Lower Saxony. 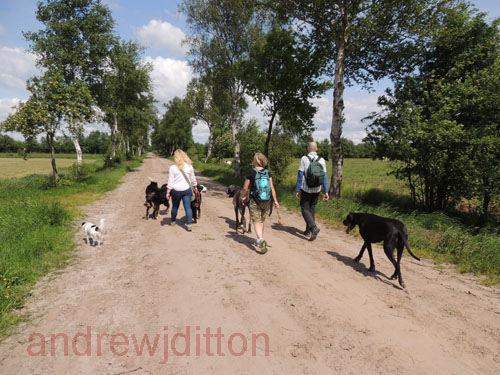 One day we all headed off back over the border to Germany to a village called Bockhorn, which was hosting a massive 'Old Timer' car show, including some lovely vintage caravan rigs too. Beautiful! 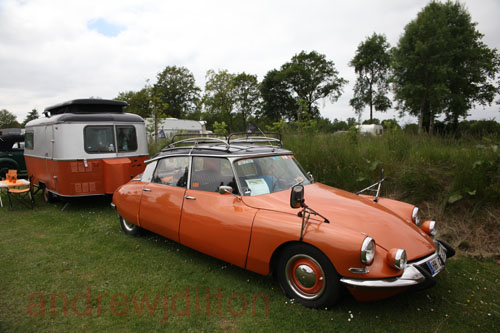 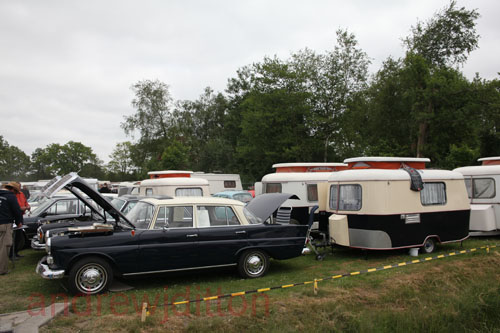 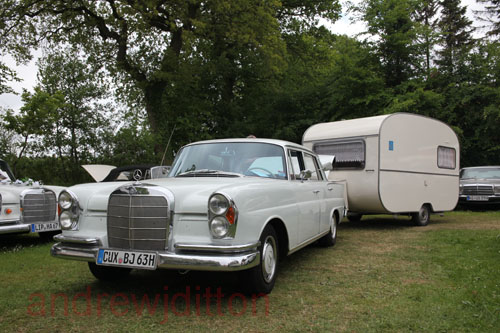 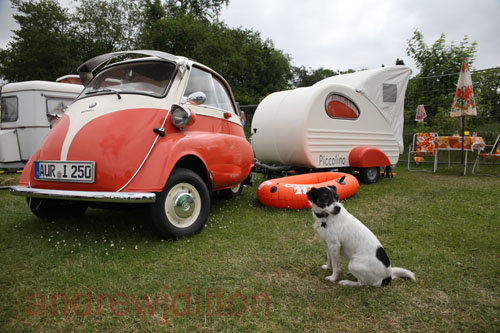 Why were we all overseas? We had a 'big' weekend to attend, the Euro13 Airstream Gathering in Weilburg, Germany. 56 rigs turned up from across Europe: 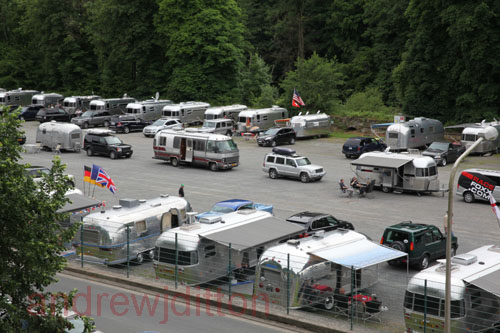 What a brilliant weekend it was too. For me it got off to a bad start when the local 'yoofs' thought it would be funny to chip golf balls out of the woods and into the queue of Airstreams waiting to enter the site. One of them hit my trailer and smashed the Heki causing over £300 of damage, and necessitating an afternoon spent in the Police station making a report. How grateful I am to fellow Airstreamer Phill for his help as an interpreter.

Other than this setback, it was great. The weekend was the perfect balance of being organised enough but not overly organised. It was certainly a credit to the organiser, the charismatic Armin Heun, and his friendly, enthusiastic, cheerful team from Airstream Germany. Attendees were free to do their own thing although a couple of activities were laid on for those who wished to go along. I very much enjoyed the visit to Airstream Germany's showroom and service centre, which is the absolute epitome of what you would expect from a premium retailer selling a premium brand. In fact, the entire UK contingent was very, very impressed. 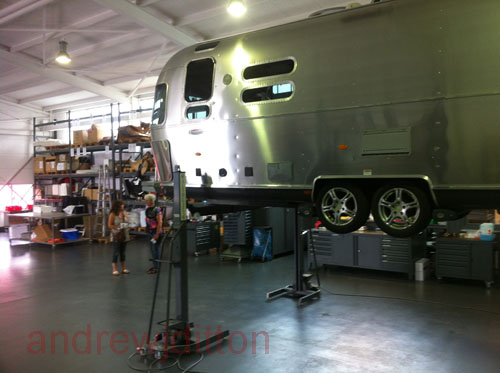 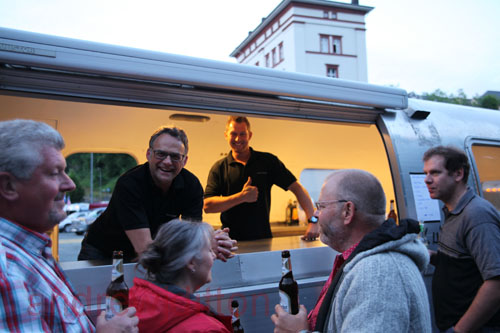 We were even honoured to have the company of Rich Luhr (of Airstream Life magazine) and his lovely wife Eleanor who had come all the way from the US of A. Rich gave us a brilliant talk and an interesting insight into Airstreaming in the US and how it compares to how we do it in Europe. 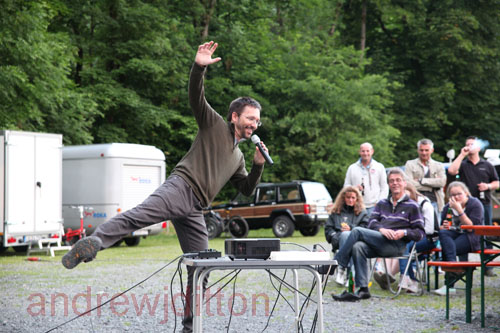 Rich's verdict? It seems that here in Europe we are more willing to head off the beaten track and use sites without facilities than our US cousins, where 'boondocking' (off-grid caravanning) is less popular than it is here. I think we can thank the Caravan Club and the Camping and Caravanning Club for that, thanks to our enviable and maybe taken-for-granted network of Certificated Locations/Sites.

Another highlight of the weekend, for me at least, was being given the opportunity to have a go at playing the bagpipes by the very talented and all-round lovely fellow Airstreamer Elaine. Well, I say that it was a highlight for me. I think the 'strangled cat' noise that I produced was no doubt one of the low points of the weekend for the unfortunates whose ears witnessed that terrible assault. 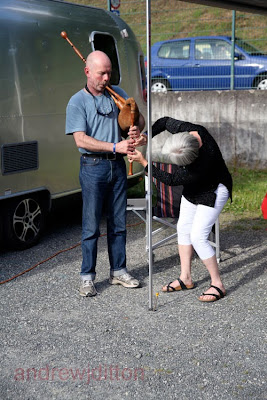 Sunday came way too soon, bringing with it the departure of good friends old and new. As we started to say our goodbyes, the tears started to flow. As daft as it sounds, I was so sad that it was over.

If you have a spare few minutes, do have a peek at the video I made of the weekend:


Dougal and I headed off on our own to Belgium and spent a lovely couple of days chilling at Camping Blaarmeersen in the beautiful city of Ghent. It seems that the E40 motorway traversing Belgium has improved greatly over the past few years, as in general it was well surfaced and traffic flowed freely.

Blaarmeersen was as pretty and perfunctory in equal measure as it has always been, and it was super to catch up with another friend on a lazy summer's day. 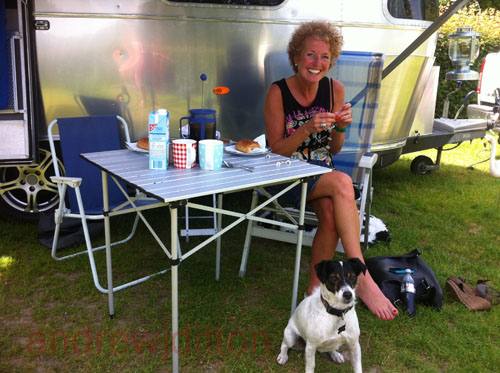 Of course, there was also the small task of getting Dougal's worming process signed off for his passport. 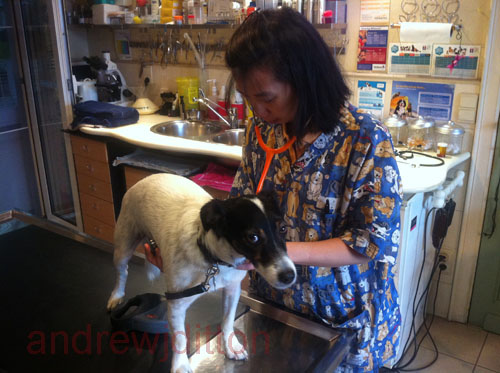 On Eurotunnel, the return leg was as straightforward as the outward. First of all we had to stop at the Pet Passport area for Dougal to be scanned and his paperwork checked. 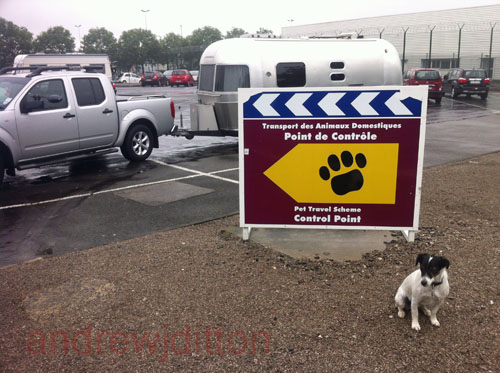 Here we saw a poster telling us that a million… yes, ONE MILLION pets have now travelled with Eurotunnel. 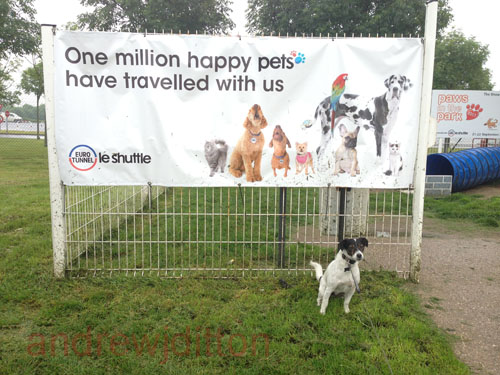 Don't the ferry companies want a slice of that pie? It appears not.

The smooth 35 minute journey was spent cuddled up on the sofa of the Airstream having a snooze while the hoards 50 metres above us were still elbowing each other in the scrum for the bar. I know where I would rather be.