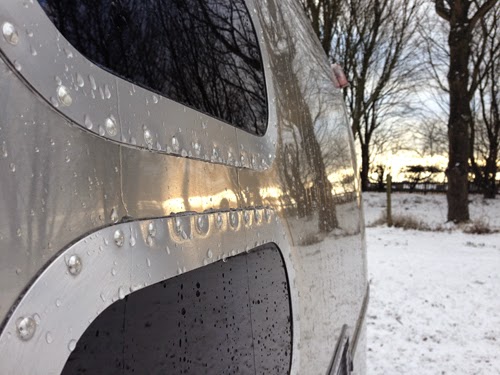 On Sunday night I drove to Rye and enjoyed an evening with my dear friends M&T, and on the way home I nipped to Camber, where I used to live, and savoured a moonlit walk on the beach just over the dunes from the beautiful, designer Eco-house that used to be mine.

Walking Dougal today I thought about that beautiful house. While I do miss it, I don't miss all the reasons why I sold it and moved into the Airstream full-time.

So when did I move into my Airstream for good? A year ago? Two years ago? Nope. It was THREE years ago. Three!

Well, there have been a few major life-events that were unforeseen. One of these was losing Dad and everything that entailed, from his end of life care, sorting through all his stuff, and then of course helping Mum move out of the big family house and into a smaller place where she could start her new life. Just so you know, she is absolutely fine and loving her new pad.

The other unforeseen life event was embarking on a University Course in Scottish Gaelic. Where'd that come from? Two years ago I started the foundation course out of interest, and here we are two years on almost half way through an intensive CertHE course that might be the footings for my first ever degree. The amount of work is a bit crazy right now, with assessments on top of the normal course work.

So much for only working two days a week in 'The Day Job'.

What gets to me, though, is that I open the garage doors at my Mum's new pad, and filling up a substantial corner of it is all my STUFF. Still! Stuff that, for the past three years, I have been meaning to sort out. I've had a bit of a sort through, and when it came to stuff like my snowboarding kit that has gone unused for three years, I looked at how much it was worth on eBay (less than the cost of ONE week's hire) and promptly put it back in Mum's garage 'just in case'. Well, I don't *HAVE* to empty the garage.

This winter, with no dramas scheduled and fortunately none occurring, I thought I would at last have the spare time to get 'everything' sorted. I even took my Winter Hebrides break before Christmas to give me a clear run after the new year arrived. Just like last year, I have parked the Airstream on a 'seasonal' pitch from October to March which means I don't have to pay any time or attention to where I will be staying. It's nice to relax and breathe a bit after a summer of roving around.

However, for one reason or another, that 'spare time' never materialised. The box of CDs still awaits sorting to go to Music Magpie. The photo albums still await scanning. The boxes of books still await sorting.

While on that walk today with Dougal, it also sunk in that in a shade under two week's time I shall be hitching up the Airstream for a three-month study/work/holiday tour of Scotland. I've already got the motorbike ready. I have two free days - count them, TWO - to get everything sorted and packed and ready before leaving, as every other day I will be at work earning those credits in order to take an extended period of leave. Tomorrow I will be packing away my winter coat and getting out my shorts, sandals, and a summer shirt or two to pack in the 'van. Dougal has 48 cans of his favourite German dog food on order to arrive before we leave. My kitesurfing kit is about to be strapped to the car roof. Winter is over and it's time to wake up and get out there again.

Sandals? Shorts? Kitesurfing? What happened to winter? Where did it go? I thought winter went on forever and you could get tons of stuff done?