WARNING: This posting contains graphic images of a cream tea. Continue at your peril.

Early this month it was time to head to the Isle of Wight..


So last week I arrived in Portsmouth to get the ferry to Fishbourne. As the ferry drew up, I set up the camera to get a possible stock shot of a caravan disembarking, but instead this was the feast for my senses: 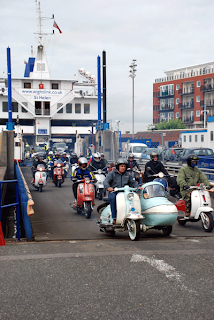 Boarding was effortless and drama-free (CalMac take note) and as the ferry pulled out of Pompey I was impressed with what I saw of the Waterfront. It certainly looks an awful lot better than the 60s monstrosity of a city centre that I remember from my last visit.

The weather was glorious and due to break that night, so time was very short to get decent snaps in. What didn't help was getting lost on the way to the site and the SatNav trying to take me down roads with a 6ft 6in width restriction. It wasn't a great introduction to the island. And the signage here is APPALLING! The other day I was following signs to Yarmouth, then suddenly just for a laugh they changed to Totland (where?), then back to Yarmouth...

Anyhow, once set up I went out to snap the site and came across this scene which made me titter (check the car registration):

It was then time to rush off to the last couple of hours of the steam fair.


I managed to set up a feature on a couple the following day, and as the show was finishing one young couple and their baby headed off with their engine and caravan: 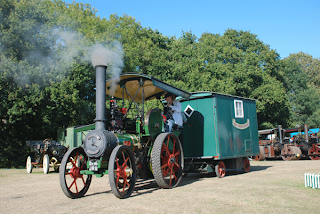 It was SO sweet. Lovely young couple, little baby, steam engine, and a 'pig pen' caravan in tow. Just so adorable. Obviously the guy loved his engine, and his partner shared his enthusiasm. Hey ho, moving on...

From there I went to The Needles, an interesting rock formation that leads into the sea off the West Coast of the Island.

As it was nearly 9pm before getting back to the Airstream, I used a little iPhone magic to find and order a curry from the nearest Tandoori. It was, without a doubt, the second worst curry I have ever tasted. The worst was at Ellesmere Port in March. The Dansak was sickly sugary sweet, and the Naan bread like crispy overcooked rubber. The sag aloo and rice were OK though, but I didn't bother saving any for the next day. Ugh, it was horrible.

The next day was less sunny but it was windy! Hurrah! After working most of the day I went to a place called Yaverland, North of Sandown on the East Coast to kitesurf, and it was OK. The beach was nice but the wind had massive holes in it so I was either bobbing up and down in the water or completely and utterly overpowered on my 12m. I came in just before a squall, and as I sat in my truck with the rain lashing down reflected on the the session: 'Well, it's alright, but it's not a patch on the Hebrides...'

So on Wednesday after doing some work I headed for a beach on the SW side of the island hoping the wind would be cleaner. The rain was lashing down and I was suffering with severe motivation issues when I arrived, but some local guys were out and they were very friendly and chatty, so with my confidence boosted I went out on my 12m.

Being slightly overpowered, but not too much so, I did some HE-YOOGE jumps and landed them OK. The waves were fabulous and there was just ramp after ramp of the good stuff. I was, as they say, stoked.

I went back and made my own curry which was stonkingly delicious. What a great day!

Thursday I wanted more of same but had some stuf to do first. When I got to the beach it was deserted but I set up anyway. But then a squall came through and I ended up sheltering under the kite like a tent, lying in the damp black sand in my wetsuit with the rain hammering down. It was quite cosy actually...

Eventually I got out and had yet another amazing session. It was absolutely brilliant and eventually came in as everything started to ache, and at this point all the locals arrived after work:

Friday was an assignment I was looking forward to: To find the Ultimate Island Cream Tea. All in the name of research, you understand! And by gum did I find it:

Naturally, I only bought it to photograph it, but once the snaps were done it would have been a shame to waste it...


From there it was back to Brook Chine and again I was the only one out, but it was another great session.

Saturday was the 'Panic' day when I had to go out and do heaps and heaps of research, but sadly for personal reasons my head wasn't in a great place to deal with such banalities. I dreared around nice places like the Ventnor Botanical Gardens whereas usually I'd enjoy such a trip immensely. By the time I got to the beach the tide was so low that rocks were exposed all over the shop. I just went home and wrote copy.

Sunday and it was time to move on to the next site....