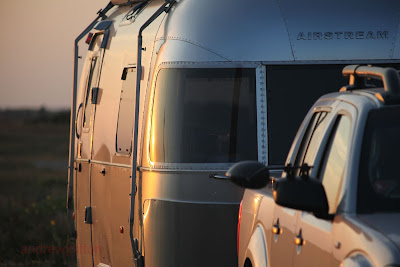 I make no secret of the fact that to me, caravanning is all about travel and adventure. It's the perfect way to live simply and reconnect with nature. As such, in the summer months I prefer not to be tied to an orange mains lead, but to go where I want to go regardless of what facilities are laid on. Or not.

With this freedom comes flexibility, as there is less need to book mains-free pitches in advance.

A solar panel keeps the batteries topped up, but a consequence of unplugging from the mains is a greater reliance and higher consumption of LPG (bottled gas).

For this reason, I have used the Gaslow refillable system for almost seven years now. For two years it was in use on my Sterling Eccles, where I had an 11kg refillable cylinder alongside a 13kg exchangeable Calor. This arrangement offered the best of both worlds, and my Renault Trafic tow vehicle could handle the noseweight. Whenever I was out and about, I'd simply pull into a service station and top up the LPG at a pump. Yet if I was stationary for a while and the refillable ran out, I could switch to Calor which, while more expensive, offered the convenience of not having to take the caravan off pitch to be filled up.

When I bought my Airstream in 2008, the Gaslow refillable system was not at the time available from Airstream Europe. The new company was still in its early days, and nothing was put on the options list until it was proven. Fortunately my nagging brought the two companies together and I took delivery of the first European Airstream to be fitted with the Gaslow system. Back in the day, having 2 x 6kg cylinders was the only realistic option given the restrictive size of the gas locker, although I understand that now the gas locker may be modified to take larger cylinders. If that were the case back then I would have replicated the set-up I had in the Sterling with just one 11kg cylinder.

However, you CAN disconnect one of the Gaslow cylinders and simply attach a propane cylinder instead. This may be an option for long-term stationary winter use.

Me, I like to travel as unencumbered as possible. Carting a 13kg LPG cylinder about safely and constantly upright is something I could do without. Therefore, at times I may run low on gas...

...which is exactly what happened this week. I couldn't understand why my consumption had been so high when the weather had been so hot. I consulted my technical guru, Pete Bull of Little Tin Hut Airstream Servicing, who pointed the finger at the fridge quoting some very precise consumption figures. In hot weather, the fridge can burn an alarming amount of gas in order to keep cool. I guess that makes sense. But it didn't help me in my critically low gas situation. I needed to preserve as much LPG as possible in order to keep the fridge running until I got to a filling station.

From the back of a cupboard I wheeled out my Dometic Origo 5100 Heat Pal. I acquired this to try out in my January off-grid trip to the Outer Hebrides, and it was an absolute lifesaver. Here it was coming to the rescue again. 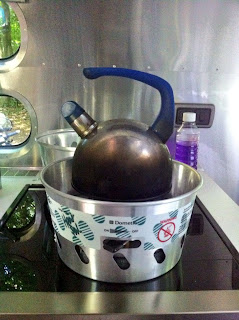 The Heat Pal burns 'Denatured alcohol', which in the UK is most easily available as methylated spirit.  It produces about 1500w of heat, so in addition to being used as a cooker, you can use it as a space heater too.

In July 2013 the law regarding the production and use of methylated spirit changed, to introduce conformity in the composition and the amount of 'denaturing' carried out in its production. As such, Dometic now recommends users to burn Bio Ethanol. I will be procuring some and giving it a go in the future.

When burning any open flame in an enclosed space like a caravan or tent you MUST have sufficient ventilation. Open flames and smouldering coals produce carbon monoxide, which can (and does) kill in a confined area.

When using the Origo as a space heater in the Outer Hebrides, it kept my 17ft long trailer comfortably warm during the day even with two windows cranked open for ventilation. For cooking, it is quite a 'slow' heat which takes about 15 minutes to boil a litre of water. A woodgas stove such as the BioLite will cook much quicker, but these can ONLY be used outside, and you have the faff of trying to get the thing lit and, in my case, chopping up the kindling to use as fuel. The Dometic Origo wins hands down on sheer convenience. Simply fill up with fuel, light with a single match, and off you go. And, with adequate ventilation, you can use it inside.

It's an expensive piece of kit retailing at about £150. Bio Ethanol can be bought fairly cheaply online at about £6 per litre. Compare that to the £3.60 I paid for 250ml of meths from Wickes.

Either way, having lived with the Origo for over six months in the snow of winter and the heatwave of summer, I now consider this to be an essential piece of kit to any off-grid caravanner.


Yesterday, we packed up and moved on and finally filled up with LPG. 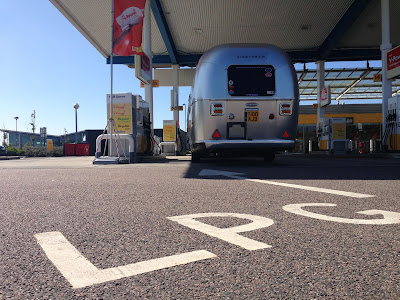 I reckon on getting through 20 single cylinders a year at an average saving of £15 per refill. That's £300 per year. So far, that's about £1200 for the four years I have had this system, not to mention the money saved by being able to use £4 per night CLs instead of £20 per night EHU pitches on sites.

In other words, even if you only do 10 cylinder refills a year, the system will pay for itself in about three years, and thereafter you'll save about £150 per year. Not to mention the freedom to go caravanning where you like, when you like. THAT is priceless. 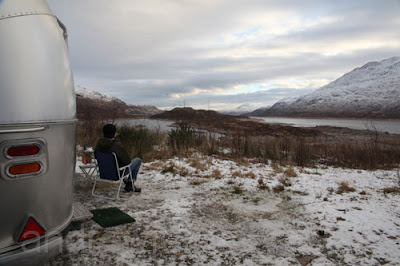