Off-grid caravanning in the Outer Hebrides. In January.

Seeing in 2013 was spent sat around the camp fire with some dear Airstreaming buddies. For a grand total of eight hours we sat by the roaring flames, drinking whisky, laughing, chatting, and quietly enjoying each other's company. My idea of a perfect New Year celebration.

Funnily enough, something to do with the amount of whisky imbibed, I didn't drive anywhere the next day. So it was the 2nd January that I headed up to Scotland.

A lovely few days was had at the new Caravan Club Site at Strathclyde Country Park near Glasgow, which has rapidly become one of my favourite cities in the UK. In fact, as I type this entry in July 2013, I'm sat in my favourite dog-friendly vegetarian pub in Glasgow. It hardly goes with its rough, deep-fried-Mars-Bar image, does it? Proof that you shouldn't believe the one-sided hype presented in popular media, and that there is no substitute for checking out places yourself.

I had a plan though. It sounded bonkers, but it was a plan. Wild camping in the Highlands and in the Outer Hebrides in January. No hook-up, no site, no worries.

Off I set. My first port of call was Tarbert on the Kintyre peninsula to catch my favourite band, Skerryvore in concert. 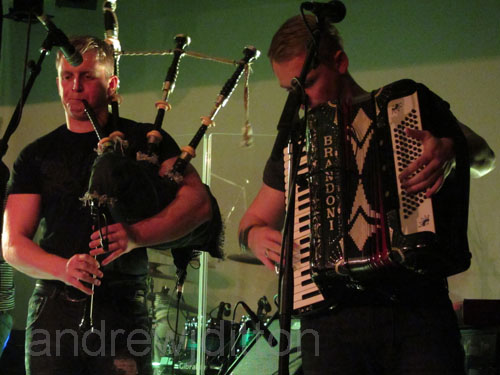 Next day I headed to the pleasant Ardgarten Camping in the Forest Site near Arrochar. 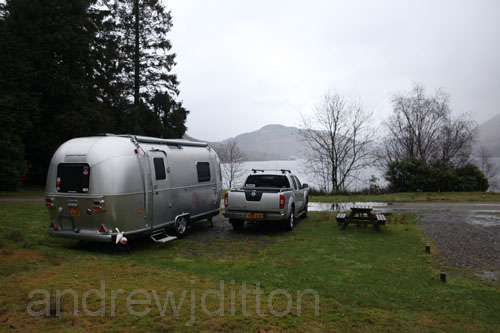 From there I headed on off up into the wilds with no fixed plan. I just knew that I wouldn't make Uig in Skye before dark, and I would need to find a place to camp by about 3pm before it got dark. When dawn doesn't break until almost 9am, that doesn't give you a lot of travelling time.

As it happened, I found a lovely little place on the Road to the Islands. I struck camp, fired up the central heating, but more importantly sparked up the camp fire. It was such a lovely evening, it would have been a shame to have missed this fire pit opportunity. 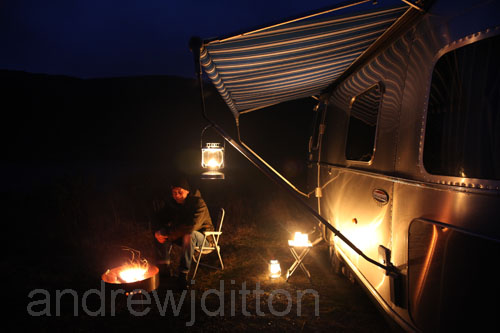 So sound I slept that night, I woke up too late to catch the one and only ferry to Harris. Did I fret? Did I rush? Did I bogroll! Rushing and stressing was not on the agenda.

Instead, I headed to Uig on the Isle of Skye as planned, where I had seen a campsite by the ferry pier on many previous trips.

The proprietor of Uig Bay Caravan Park was a friendly, welcoming, charming chap, and I knew as soon as he agreed to my pitch that my 'accidental' sleep-in that morning was in fact a fortuitous occurence. 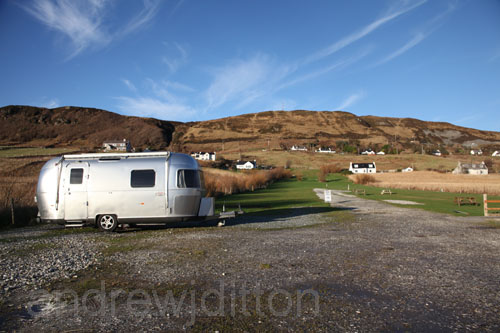 Next day, we were all aboard Caledonian MacBrayne's mv Finlaggan on our way to, you guessed it, the Isle of Harris. I had no clue as to whether the campsite would be open, but thought at least on Harris we would be able to tuck ourselves behind a mountain in the lee of the wind, unlike flat-as-a-pancake Uist where the winter wind has proved a problem in the past. The fact that the Skoon Art Cafe would be open was of course also a deciding factor. Were the weather to turn bad, I would need somewhere to shelter and eat cake. And if the weather was good, I would still want to eat cake! 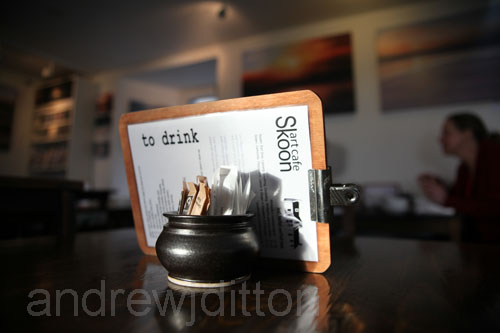 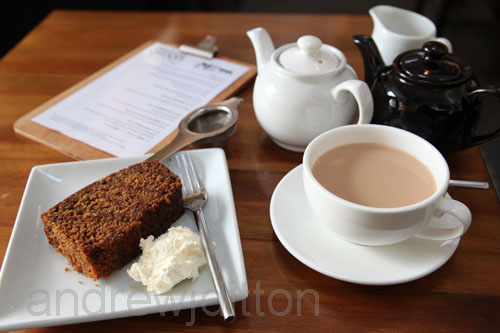 I'm not sure if Horgabost Campsite was open or not. All the seasonal caravans had gone and the facilities were all locked up. However, just like the bulb fields of the Netherlands, they can't exactly take it away when it's not in season, can they? Most importantly, the water tap was working. I pitched up in splendid isolation and enjoyed a stunning view. 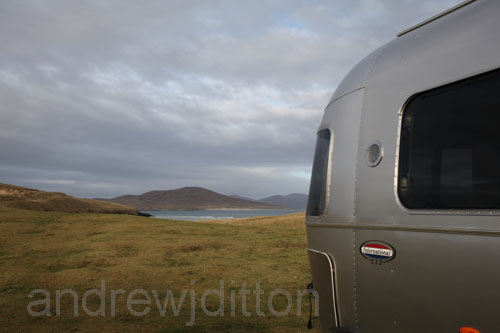 Now, people will quickly tell you that the weather in the Outer Hebrides is rubbish. I was fully expecting to stay about three or four nights and head back to the mainland having gone barmy at the poor climate.

I'm starting to think that this whole 'Bad weather in the Hebrides' reputation is pure myth. I think that the people who go off-season like to have the place to themselves, and therefore 'big-up' the weather to put other would-be travellers off.

Well, the weather was NOT rubbish. In fact, it was pretty good. Every day Dougal and I went walking, and most evenings I sat around the fire pit outside for at least an hour. 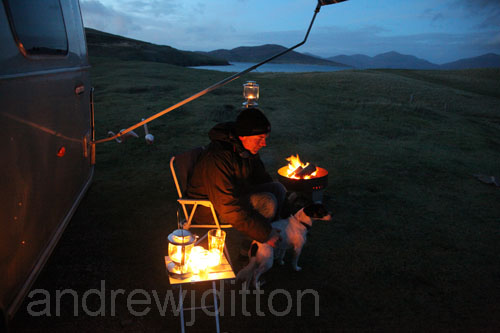 Soup, cheese, and cakes were consumed at the Skoon Art Cafe, and Saturday evening supper was enjoyed at the Temple Cafe in Northton.

I wanted - NEEDED - to stay longer, but the Alde Central heating is not frugal with bottled gas. My Gaslow refillable cylinders were emptying at an alarming rate (1 x 6kg cylinder lasting about 3 days) and I knew that in order to stay on, I had one of two choices:

I figured that (2.) was the simplest option. I knocked on the door of the Lickisto Campsite and asked if I could pitch up.

Lickisto is a campsite I have not previously mentioned. For a start, it is not easily accessible by all caravans, only smaller single-axle vans. The hardstanding pitches can fit three camper vans or two caravan rigs, so of course it makes better sense for the owners to court the custom of camper vans.

These issues don't really apply in January, and the lovely owners welcomed me with genuine warmth and the offer of freshly-baked bread despite the fact that, actually, the site wasn't really even open. But in the Hebrides, such details rarely matter. Both sides give and take a little. It's one of the many things that make this place so utterly special. 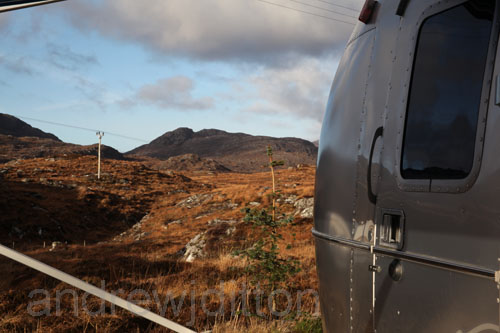 Leaving the island was the usual sad, torturous task. As ever, I stood on the outside deck of the ferry at the aft end watching Tarbert disappear into the distance with tears filling my eyes. Little did I know that it wasn't quite over yet.

Snow fell as I journeyed across the Isle of Skye, and it was the perfect kind of snow. Enough to coat everything in a clean, smart, bright, fresh white powder, but not enough to cause any kind of disruption.

I headed to the same spot where I had camped on the outward journey, although it was nearly dark when I arrived. 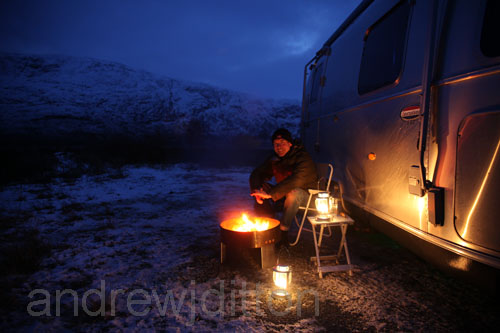 Next morning, as I cooked my porridge on the BioLite Stove outside, the view was utterly magnificent: 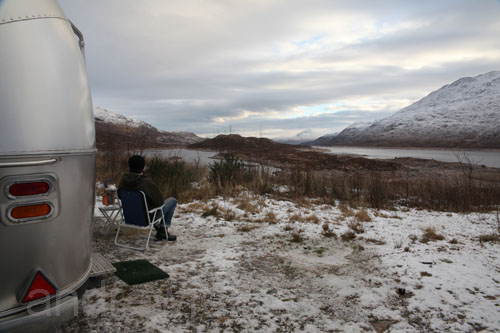 As I made my way across Glencoe, the snow was deep, the sun was bright, and the sky was blue. 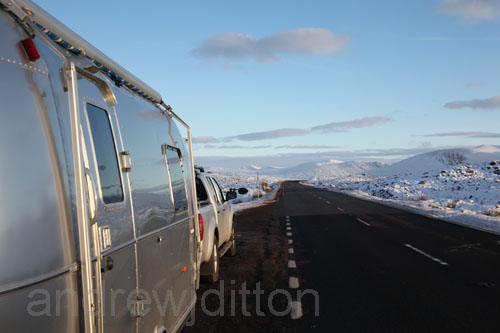 So there you have it. Wild camping in Scotland in the middle of the winter turned out to be one of the most enjoyable and rewarding caravanning experiences ever. Utterly fantastic.

Finally, naturally, there is a small video for you to savour of the trip. Enjoy!

Winter Caravanning in the Outer Hebrides