The Rocky Road to the Islands Part 1 - The M25, Twittercamp , Yorkshire, and Glasgow

As keen as I was to get to the Outer Hebrides as quickly as possible, something always seemed to come up. Both the motorcycle and the car took a lot longer having paid-for attention lavished upon them than originally anticipated, and as such were only ready by the 11th hour. I also took it upon myself to get my financial paperwork up to date so as the accountant could work on my tax return. In my case the process starts by retrieving a year's worth of receipts and starting a ledger. I hate admin, I hate it with a passion. It was a mind-numbingly boring job, but one I was glad to clear in order to free my mind so that it was free to absorb as much island vibe as physically possible.

On the long journey North from Kent, my first port of call was a site near Banbury in Oxfordshire, Bo Peep Caravan Park, to the first ever 'Twittercamp'. In other words, this was the UK's first ever caravan rally to be solely organised by Twitter. There was a grand total of four caravans in attendance including the UK's most famous Tweeting caravan, Elvis the Elddis. 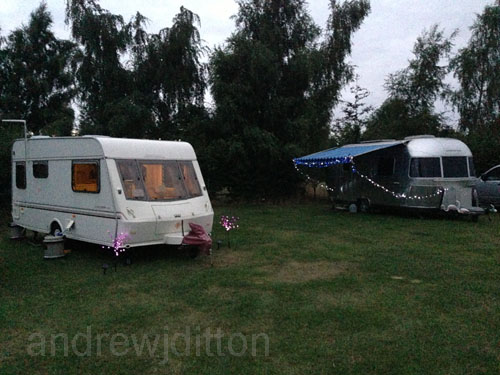 The event has already been well blogged so rather than repeat what's already been said, take a look at this entry by Richard in his entertaining caravanning blog A Load of Nonsense. 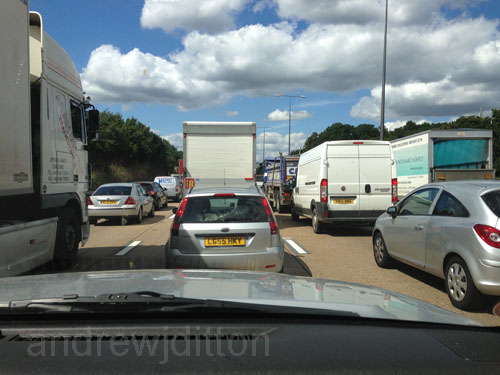 Fortunately we all enjoyed a lovely chilled weekend, and hats off to Bo-Peep for allowing fire pits. Certainly a site to recommend.

Next up was a trip to the Caravan Club site at Clumber Park near Worksop for a feature. That went well despite the fact that I always forget that Clumber Park has no mobile signal. Not so bad when you're caravanning for relaxation, but not so good when you're trying to arrange meetings and so on. Still, everything went to plan so I was away by lunchtime on Monday.

The plan was to get the ferry from Oban to South Uist on Tuesday. I didn't book, just in case Monday's job overran. During a break on the A1 I called CalMac only to find that Tuesday's ferry was full. Blast! It was so full, even the wait list was closed. The next departure? Thursday. Dash, blast, and other such expletives. Quickly I booked my passage for Thursday and wondered what to do for the next two days.

I ended up in Yorkshire near the lovely town of Richmond to start a job that is planned for September. 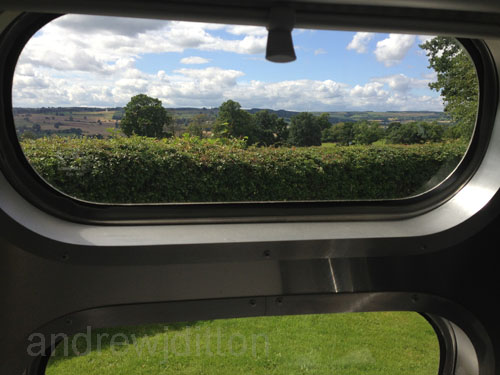 A nice diversion it was too, but I was getting majorly frustrated at my lack of progress North of the Border despite having done my last shift in the day job over a week prior. To add insult to injury, the mains lead to my laptop broke. To a 21st Century freelance journalist, a laptop is an essential tool. Blast again!

A quick overnight at the super-convenient Strathclyde Country Park Caravan Club Site made for the ideal opportunity to unload the motorbike and scoot into Glasgow for the offending item. I'm no particular fan of Apple, but I do like the fact that when you need something like that, you walk into an Apple shop, say 'Help!' to the first person you see in a blue T-shirt, and five painless minutes later you are walking out of the shop with exactly what you need. Yes, you may be far lighter of pocket than before you went in, but for the sheer lack of hassle and the complete convenience of it all I don't mind paying that bit extra.

That night I was cued up to go onto National Radio to talk about caravanning. The researcher called as I was about to climb onto the motorbike in Glasgow just to go through a few things. She asked about my caravanning, and I told her of some of the exciting adventures that I am privileged enough to experience, be it wild camping up a mountain in the snow in January or kitesurfing off the white sands and turquoise seas of a Hebridean Island.

As ever, I didn't fit the profile of the kind of caravanner they wanted to portray. As usual, I was dropped. Still, it wasn't all doom and gloom. The Asda at Hamilton just down the road from Strathclyde Country Park sells Harviestoun's Bitter & Twisted, one of my favourite ales. At least I no longer needed remain stone-cold sober that evening. Mwahahaha! Labels: On the road, Rally