The Rocky Road to the Islands Part 2: Wee beasties, a long ferry ride, dark islands, and a dark mood

The drive to Oban was… OKish. You need to remember that despite the fact that this was my fourth trip to the Hebrides this year, the two that I had already done by car were in January and March. In May I came by train for the weekend. Now here we were in August, and that awful plague of little black parasites was swarming Scotland and making life hell for everybody there. Wee beasties they are. No, I'm not talking about the midges. I'm talking about the little black hire cars like the Vauxhall Corsa, Kia Picanto, and all those other basic little hatchbacks pootling along at 35mph while the idiot in the driving seat has neither the manners nor the decency to pull over and let other traffic pass. At one point I myself pulled over to allow the line of cars to pass my rig, thinking that at least they would have a better chance at getting around the wretched doddery git in front than I. One by one they all turned off until I was behind Mr or Mrs Numpty again. Every time a decent straight bit presented itself to overtake, they would speed up to 50. As soon as there was a kink in the road or a car came the other way, back to 30. ARGH! Finally, after what seemed like six hours (but was probably closer to 25 minutes) God smiled at me and presented a huge, long stretch of straight, open, empty road. I whumped the Navara into third and floored it.

Did the numpty in the hire car see that someone with a 40ft long 4 tonne rig was coming past? Probably. DId they slow down to allow me to safely pass? No. Actually, they did the usual thing and sped up. Forward vision was sufficient to put nobody in any danger, but let's just say that I may have cut back in before I would normally politely do.

The rest of the journey to Oban passed without event, and at check-in out came the tape measure to make sure the Airstream was indeed its declared length on the booking. 'It must be busy again' I thought as I took my place in the lanes.

A few minutes later I was joined by some cars in the lanes, and their occupants came up to me beaming and smiling. 'Nice move you made back there,' they said to me.  'We've been stuck behind that awful car all the blooming way, it's been dreadful!' and off they went to calculate how much brandy they could legally drink to calm their nerves and still be safe to drive upon arrival.

Out of the misty rain appeared our trusty vessel, Caledonian MacBrayne's mv Lord of the Isles, or LOTI to those close to her. 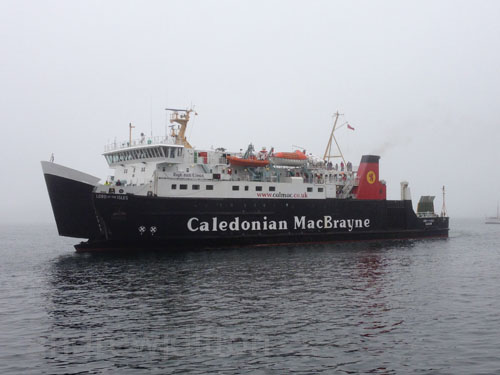 It is at this point that I admit to being a ferry anorak. You see, LOTI may be as old as the Ark, and her entire car deck is about the same size as an ashtray on the latest Dover-Calais superferry, but I love this ship. Many modern ferries look like a cross between a nightclub, a tart's boudoir, and a supermarket with their glitzy twinkly plastic interiors and polished chrome handrails. LOTI, on the other hand, is a ferry. Just a ferry. A comfortable ferry with plenty of outside space, a posh observation lounge (free of charge), a cafeteria, a purser's office,a quiet lounge, a TV lounge, and a wee bar cum coffee lounge, but still just a ferry. 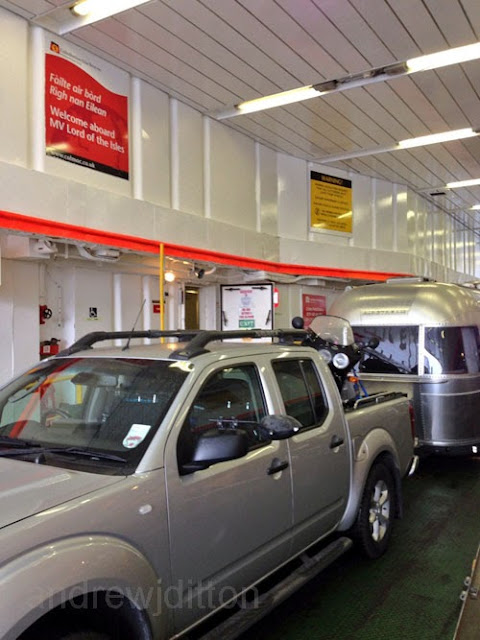 We will come back to LOTI later in the blog.

Like all CalMac ferries with passenger space, LOTI has a Pet Area. I didn't need to leave Dougal in the car alone for the five hour crossing, he could come upstairs with me. 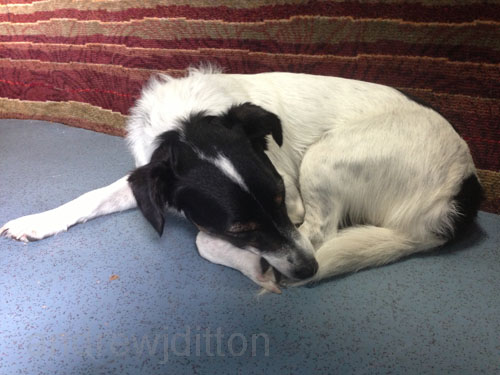 We went outside but the mist was thick so there was no chance of enjoying the gorgeous scenery that you get on that route where the Isle of Mull drifts past the port side and the equally splendiferous Ardnamurchan Peninsula drifts past the starboard. Therefore we got comfy in the pet lounge and got talking to a nice English lady who had not long previously spent the entire winter on South Uist. Her story intrigued me, as it's always in my mind to move to the islands one day. My biggest fear is the fear of loneliness, as I'm on my own without a partner. I am sure that this lovely lady had many battles to fight and had nobody but herself to snap herself out of bad days. However, the fact that the winter in the islands was always going to be be temporary, with her long-standing wife waiting for her when she went back home to England in the spring, kind of watered the whole thing down for me a bit.

It's a bit like when you see these idiots on the tellybox (not that I even have one) who make out they're out in the wilds all alone for six months, just like a certain presenter who did North Uist a couple of years ago. Oh yes, he was all alone alright, all alone with a production team of about six. Island gossip also reports that this solitary figure also flew home to England on many weekends to see his girlfriend. 'Tis funny how that was never mentioned in the series.

But I digress. My fellow passenger who had overwintered in South Uist still had an interesting tale to tell. The weather improved and the scenery appeared. We had a nice crossing.

The five hour crossing felt like… well, five hours really. Long enough to unwind and chill, and even to get a little bored. But that's all part of the experience. I love seeing the islands gradually appear in that painfully slow way, imperceptibly getting bigger by the second as LOTI powers her way through the inky black sea. 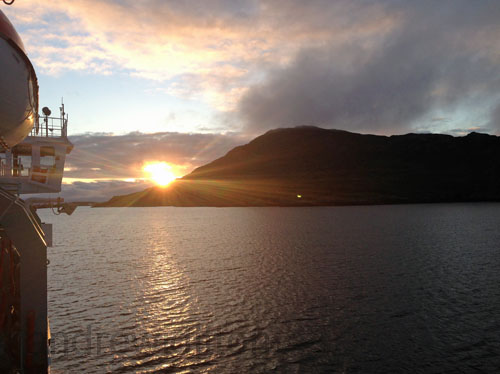 Lochboisdale is always a bit of an anti-climax compared with its prettier North Uist cousin Lochmaddy, and especially when compared to the ridiculously pretty ports of Tarbert in Harris and Castlebay in Barra. Castlebay was LOTI's next port of call, which would take two hours from Lochboisdale. As we approached port, a couple on board who looked as if they had really had enough asked me: 'Is this Barra?'. I explained that on Thursdays, the journey to Barra takes seven hours instead of five, as the ship comes to South Uist first. The look of abject horror and despondency on their faces was a picture. 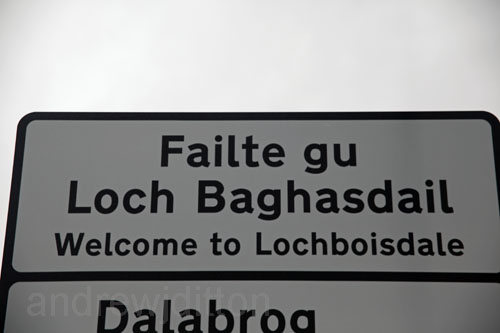 To be fair, Lochboisdale (or 'LB' to locals, apparently) isn't too bad at all really. It's just the that wonderful breed, 'The Planner' at the local council decided that an ugly parade of shops was a suitable welcome for people driving off the ferry. Still, it beats Stornoway hands down where you are greeted by a pig-ugly Tesco that looks like an inverted ice-cream tub. Tesco has now decided to launch Home Delivery across the islands, just to make sure they finally finish off all the lifeline community stores. DON'T get me started...


Compared to the warm and sunny weather I had left behind in Kent, the weather in the Outer Hebrides was decidedly grim. 'There'll be no stunning sunset or sitting by the fire pit tonight' I thought as I headed off to one of my favourite wild camping spots for the night. By all means I had it in my head to try out the new sites on the island, but I like to wild camp on my first night just because… just because I can.

As I arrived at 'my' place, a VW Camper had beaten me to it. Of course, they had as much right to be there as anyone, but I was still a wee bit miffed. Stupid of me, really.

My trip was preceded by an unusual feeling of ambivalence. I had really, really enjoyed the warm weather and the offerings of my home county of Kent during July. Niggles and setbacks had prevented me from getting to the islands quickly. The weather was rubbish, and now someone was parked in MY spot.

Was this finally the end of my love affair with the Hebrides?